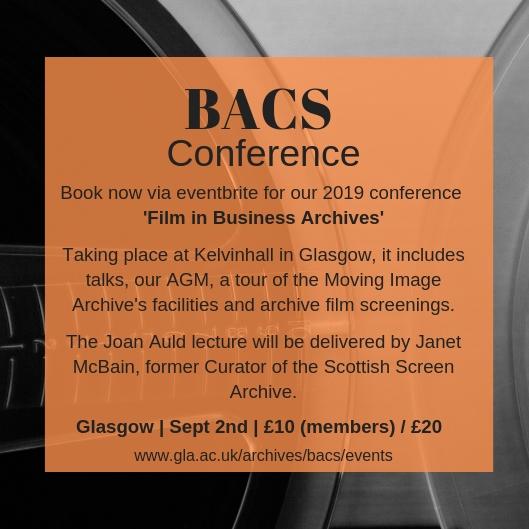 The 2019 Business Archives Council of Scotland conference will take place on Monday 2nd September at the Kelvin Hall in Glasgow. It is on the theme of Film in Business Archives and is a collaborative event between ARA Scotland, Moving Image Archive and with support from Capturing the Energy.

We are delighted that the 2019 Joan Auld Lecture will be delivered by Janet McBain, former Curator of the Scottish Screen Archive (1976-2011).The programme is as follows:

Lightning talk: Shona Thomson, Creative Producer and Curator, A Kind of Seeing | It’s a kind of Christmas at RBS

Ingrid Jeacle, Professor of Accounting and Popular Culture, University of Edinburgh | “Going to the movies”: accounting and twentieth century cinema

Contact us at bacs@archives.gla.ac.uk if you have any questions about the conference in the meantime.