This year, 2020, is the sixtieth anniversary of the founding of the BACS in May 1960. This was the initiative of Sydney Checkland, the new Professor of Economic History at Glasgow University, appointed in 1957. Between 1957 and 1959 he raised funds from the business community in Glasgow to establish a Lecturer in Business History, the Colquhoun Lecturer, in the University. His task was to conduct a survey of the historical business records of firms in Glasgow and the west of Scotland. It was thought that this would take two years; we are still at it sixty years later.

The development and growth of BACS is best seen in three phases. The first phase ran from 1959 to 1976 and was driven by the efforts of two Colquhoun Lecturers within the Department of Economic History and in the framework of the BACS supported by the National Register of Archives for Scotland (NRAS) in Edinburgh. The first Colquhoun Lecturer was Peter Payne in post from 1959 to 1969. Working with sequences of young assistants he established the Economic History Department Business Record collection, housed from 1967 in the new Adam Smith Building record store from 1967. From 1970 that responsibility passed to the second Colquhoun Lecturer, Tony Slaven. This coincided with the then Scottish Record Office along with the NRAS funding the appointment of several Regional Registrars as business surveyors. The Western Registrar based at the University of Glasgow was Michael Moss. The Colquhoun Lecturer now had support from the new Western Registrar, and the assistance of Prof. John Hume from Strathclyde University. They with BACS went into overdrive in the rescue of the vast collection of business records in the collapse of Upper Clyde Shipbuilders. This so expanded the Economic History department business record collection, that the Colquhoun Lecturer persuaded the University that the management of the Adam Smith Record Store be passed to the University Archives in 1975.

This arrangement initiated the second phase of BACS development. As the BACS Executive Committee succeeded in raising matching funding from the Scottish Record Office to appoint its first Business Surveyor to continue the work of the Regional Registrars as those appointments came to an end. Between 1977 and 2011, a period of 34 years, no fewer than 15 Surveyors worked on behalf of BACS to locate, survey and find a secure home for business records often at risk of destruction. This phase began with David Cross in November 1977 and ended due to a cessation of funding in May 2011 with David Luck. This initiative had contributed more than 600 surveys to be deposited with NRAS and many hundreds of collections deposited with public archives.

The third phase saw a change of focus with efforts concentrated on implementing the National Strategy for Business Archives in Scotland from 2011 to 2016 and the development of the BACS as a networking organisation for creators, custodians and users of business archives. In this phase of our activity BACS has concentrated on delivering a regular conference, workshops and recently our corporate connections events for members. However, in 2014 surveying activity was reinstated when BACS raised funds in collaboration with the Ballast Trust, the Lind Foundation, the University of Glasgow Archive Services, and the University of Aberdeen’s Capturing the Energy project to appoint Cheryl Traversa as Business Archives Surveyor. From 2016 this post has been funded by the Ballast Trust with strong links to the BACS as the postholder, currently Chris Cassells, serves on the Executive Committee.

The BACS Executive Committee plans to celebrate its sixtieth anniversary with a range of special events and activities now stretching into 2021. We hope all our members will enjoy the events and join in the online activities whenever possible.

Our plans for a programme of events in 2020 to mark sixty years of the Business Archives Council of Scotland have undergone a series of changes due to Covid-19. Originally we had hoped to deliver an anniversary themed conference in the Autumn and a birthday event in May to mark the date of the first AGM in 1960 held in Glasgow on the 25th May.

However, the ongoing situation with Covid-19 in Scotland has meant that the executive committee postponed all plans for physical events to mark the 60th anniversary this year. This affected our plans for a reception in May and the Autumn conference.

Instead we have focused on preparing some digital content and activity. On twitter @BusArchScot, we’ve been sharing BACS moments under the hashtag #BACScot60 and have been taking part in the Archives and Records Association’s awareness campaign in April #Archive30 and have plans for #ExploreArchives this year also.

We were fortunate that the filming by Prickly Thistle Video had already taken place in early 2020 so we will also have these films to share soon about BACS and Scotland’s business archives sector.

Finally, we have been researching our own archives and those of partner organisations like the National Register of Archives for Scotland and key individuals like Professor Sydney Checkland and William Lind (BACS secretary for 15 years) to identify material that will be added to this timeline for the new website and used for articles and an expanded history of the Council published later in the year.  The BACS archive collection is being processed by the Ballast Trust who are identifying items to digitise and add to the timeline. Some of these documents have inspired our new logo which is based on an early letterhead of BACS found in our collection. 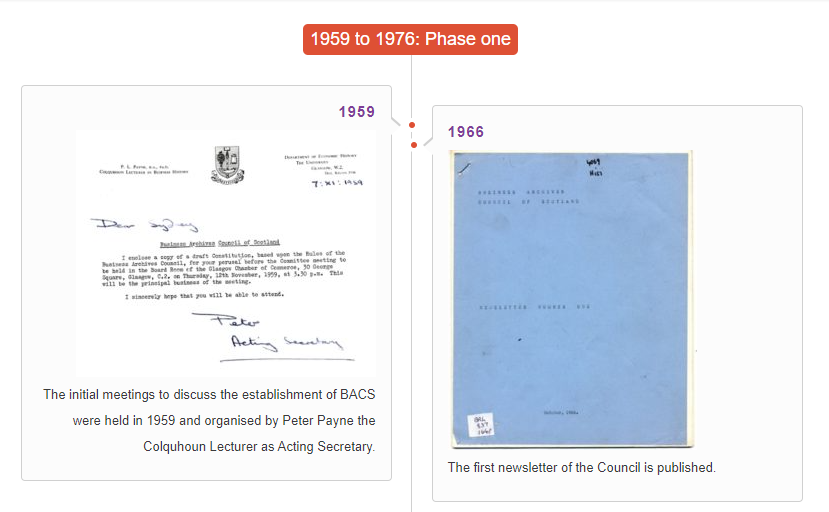